Home/Gaming/‘Tears of Themis’ Android, iOS Version To Debut This July! Pre-Registration and Other Details Confirmed By MiHoYo
Previous Next

“Tears of Themis” the new romance detective title from MiHoYo will soon debut this coming July 29 on iOS and Android.

(Photo : Screenshot provided by MiHoYo )
‘Tears of Themis’ Android, iOS Version To Debut This July! Pre-Registration and Other Details Confirmed By MiHoYo

The way forward has been blocked and shattered. You will have to dig your way through with your own hands to find the truth.

“In this upcoming free-to-play game, players will start their legal career as a junior attorney and be accompanied by fourdistinctivemale protagonists with complex personalities as they hunt for the truth and unravel the massive conspiracy lurking behind the worlds of justice and crime,” said the giant game developer of “Genshin Impact” and “Honkai Impact 3rd.”

MiHoYo announced that the new “Tears of Themis” will allow players to embark on an adventure of wits and romance. Gamers will need to play as a junior attorneys at the so-called Themis Law Firm.

At the beginning of the game, they need to work with their companions to solve some unique cases that happen in the fictional Stellis City. Players are required to investigate some crime scenes, as well as interrogate cases of suspects and witnesses.

According to MiHoYo’s latest press release, the developer of “Genshin Impact” released the latest trailer called “Shattered Path,” which shows that players will have multiple objectives during their in-game investigations. 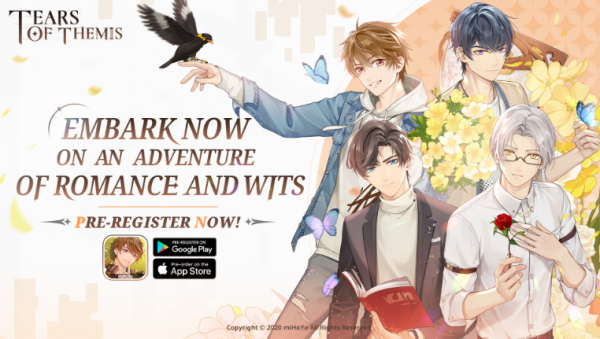 (Photo : Screenshot provided by MiHoYo )
‘Tears of Themis’ Android, iOS Version To Debut This July! Pre-Registration and Other Details Confirmed By MiHoYo

What awaits you at the end of the dark tunnel? A bright and just future… or false hopes?

These include collecting and examing crime clues, as well as gathering key phrases and suspicious features from suspects and witnesses.

In every last part of a mission, gamers need to present their gathered evidence at the court. This will allow them to support their arguments and defeat the prosecution.

On the other hand, MiHoYo also confirmed that the pre-registration for iOS and Android versions of “Tears of Themis” is now available on the official website of the game.

“Gate for pre-registration has been lifted since June 17 on the App Store, Google Play Store, and the official website. Currently, more than 400,000 ‘juniorattorneys’ have joined Themis Law Firm through the official website alone,” said the game developer.

Noisy Pixel reported that if the pre-registration of “Tears of Themis” reaches exactly 500,000 installations, MiHoYo said that it will release some exciting freebies for those who participated. These include S-Chips, the in-game item Tears of Themis, and more.

As of the moment, the participating players has already reached 418,000.

The upcoming Android and iOS versions of the game are expected to support different languages, such as Traditional Chinese, English, Japanese, Korean, and Simplified Chinese.

If you want to see more information about the game, all you need to do is click this link.

For more news updates about “Tears of Themis” and MiHoYo, always keep your tabs open here at TechTimes.

This article is owned by TechTimes

ⓒ 2021 TECHTIMES.com All rights reserved. Do not reproduce without permission.